One day I walked into an event called “Anything But Stand-Up” run by Beverly Mickins.  That was my start.  For a year I went to nearly every coffee house open mic in LA, and then won the Uncle Clyde Stand-Up Comedy Competition and got my first week at The Ice House in Pasadena.  I have since appeared in colleges and clubs and theatres around this great land, and LA.  Now- what with me having young kids- it’s mostly LA.  I love the Fake Gallery, I love Flappers (where I have gotten to perform with my fellow Dirty Work pal Mary Lynn Rajskub), and I love The Tomorrow Show run by Ron Lynch.

And reviewers have said nice things about me.

(LA Times)  “Her act is a sly, brilliant take on the American perception of British reserve concealing a capacity for outrageousness… She makes it all go down with precision delivery and crisp timing.”   The LA Weekly also was quite generous.  “Moira Quirk is aptly named playing a prim and proper British accent against a wicked sense of humor and a touch of gleeful malice.”

The Tomorrow Show at the Steve Allen Theater:

From “15 Minutes of Fem” at the Egyptian Theatre, Hollywood:

Here is a nice bit of press when my husband and I were the LA Weekly Pick of the Week. 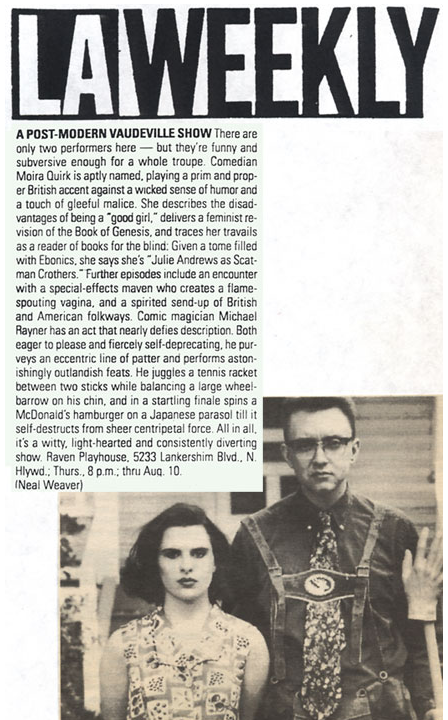